So after riding my hardtail mountain bike (Specialized Hardrock) for four or five years and approaching 6,000 km I decided that I needed to treat myself to a more resilient bike. Having worn out, replaced and up graded most of the original components it was either a total rebuild replace what was left of the original bike or time to go full suspension.

For some time I’d had my eye on a Santa Cruz, I had flipped between other manufactures, Specialized, Canyon, YT, Mondraker etc… but for reasons only known to the illogical part of my brain I had my heart set on Santa Cruz. When I first started looking I was looking at an Cross Country (XC) 29” like the Tallboy 2 LT, my wife had said that I could buy a Santa Cruz if it was pink (not that I was asking permission) so when the Bronson 2 came out in Kalimotxo red (er pink), which incidentally is a Spanish drink consisting of red wine and Coke, I felt I had no choice other than get myself a nice new bike.

I hadn’t really been looking at All Mountain (AM) bike thinking that I was riding more XC than trail, however I didn’t need much convincing that it would be the bike for me. There wasn’t a great weight penalty and it still has the option to run a front derailleur, not that I ended up running one in the end but it’s nice to have the option should I change my mind on ‘one by’. So having decided on pink, er I mean AM I needed work out what exactly I was getting, having looked at the options I decided that the carbon cc frame was what I wanted, I was aiming to get a total build weight of less than my hardtail so the target was set at sub 13kg. Looking at the stock builds I didn’t really like the options there were, this was only on a minor level and a result of me being fussy and looking for a reason to build my own bike to my own specification.

So having made the decision to buy a frame and then build it up I set off on a journey of discovery, having never actually built a bike up from a bare frame before. I had previously rebuilt bikes having stripped them right down, but I had had always had the original build to use as a reference point. I knew that most of it would be a simple bolt it together just like a giant Lego set, there were a couple of bits that required a bit more thought and patience to ensure that things worked and more importantly no damage was done. The first job I had to do was to fit the headset, this was my biggest concern given that squashing an aluminium headset into carbon fibre was something to be taken lightly. I didn’t really want to resort to old school drive it in with a hammer and with headset presses costing more than £100 I did nearly pay my local bike shop to fit it for me. Having a dad who has an ancient lathe and a stock of aluminium making a custom headset press for some time and a couple of quids worth of threaded rod and I was back to fitting it myself. The only other issue I was worried about was cutting the brake and dropper post hoses down as I’ve had issues with bleeding brakes in the past.

So on with the build and as I alluded to earlier the specs for this bike changed, so now not only is it not the bike I set out to buy, it’s not even the bike I set out to build. Early on the process I decided that I wanted to use premium parts not necessarily top of the range parts but the best I could justify spending my hard earned cash on. It ended up being a Hope / Shimano XT build with a few others thrown in for good measure, originally it was to be a complete XT drive chain but availability of XT boost compatible crankset necessitated a change to a Hope crankset.

I went for a ‘one by’ chainset on the grounds of weight saving and simplicity, one less thing to go wrong or replace. I’m still not 100% convinced that ‘one by’ is the right way to go, I’ve had to compromise on ratios, maybe some experimentation with chainrings may change this. Currently I’m running 34 / 46-11, I’m struggling a little on some climbs but I’m not sure if it’s gearing or down to me failing to cope with the technicality of the climb, time will tell, I’ve digressed on with the build.

I went for wheels hand built by 18bikes, primarily because there was an offer on with my frame, but the Stans Flow rims on Hope pro 4 hubs with DT Swiss double butted spokes are immense. They are set up tubeless with Schwable Nobby Nics, this was not an easy task getting the tires on the rims was a struggle and I’m not sure that I would have got them seated if I hadn’t been using a compressor to inflate them. On that note fitting tubeless tires for the first time is a little unnerving mine required a fair amount of pressure to get them seated on the rim, that being said I did read later that a water/soap mix on the rim aids seating, so I’ll try that next time I need to.

Suspension is provided by a Fox Factory Float at the rear and a Rockshox Pike RCT3 boost up front. Both offering 150mm of travel and three position compression lock out, I've not managed to bottom out the fork yet I've come close with the rear shock, so I haven't investigated bottomless tokens on either yet, maybe if I start pushing harder I might need to. The drive train is Shimano XTM8000 well rear mech, cassette and shifter, the crankset was originally going to be XT as well but availability lead me to have a change to Hope and wow its is a thing of beauty, I had to get some crank boots so as not to scratch it. The gold KMC chain was just an impulse bling buy over the silver but having fitted it it does look the part, I'm sure its no different than silver but it sure does look good. Stopping is again provided by Shimano again XTM8000, my previous bike has Avid juicy five and they are a bit of a pain to keep going, admittedly not as my of a pain as my mates Elixirs. Sintered pads coupled with 180mm Ice tech rotors have more than enough stopping power, the levers are nice on the finger the reach adjustment allowing easy set up.

Seatpost had to be a reverb stealth, I'd fitted a reverb to my previous bike and the improvement it gave me over a fixed post was unbelievable really transformed my riding and now I wouldn't be without one. A WTB saddle and Raceface bars with Santa Cruz Palmdale grips gives me something to hang onto and somewhere to park my bum. The 760mm bars fell so much nicer than my old 500mm bars, even if I do struggle to get it in and out of the house. 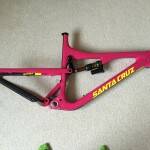 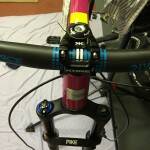 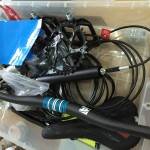 A box of bits 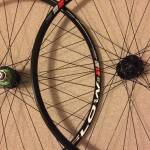 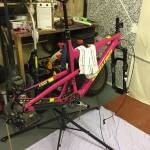 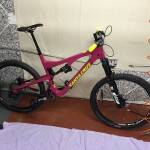 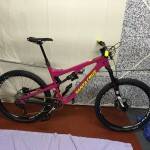 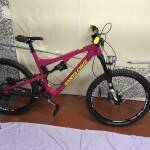